July began well with our annual trip to the Old Coulsdon village fete. I love this event as it embraces traditional to the max; have-a-go stalls with prizes, you know the type – coconut shy, tombola, guess the name of the giant (and I mean GIANT) Teddy bear. A fab display by the army cadets kept us entertained. There’s a big refreshment hall for when you feel peckish, selling homemade cakes and proper mugs of builders’ tea and generously filled sandwiches of every kind. Children have plenty to keep them occupied including a bouncy castle and a big inflatable slide. Classic cars are on show. There’s even a mini dog show, so basically something for everyone. We love it and several family members usually turn out. We were blessed with sunshine this year, thankfully, and much fun was had by all.

Here are a few pics: 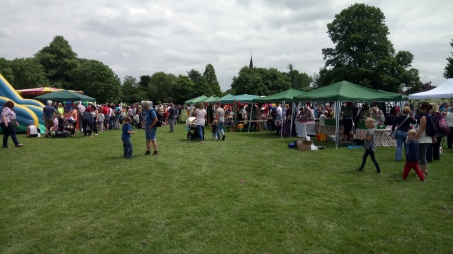 Mr B and our niece

On the second Monday of the month, my mum, my older sister and I met up in Croydon to go hat and bag shopping as my nephew (big sis’s eldest son) is getting married next April. I’ve already bought my dress, bag and shoes so was very much an extra pair of eyes as they say. Mum and sis have also already bought their outfits but Mum was on the lookout for a matching jacket and with my sister on hat and bag hunt, we set off for a good browse yielding success which meant smiles all round and a cheeky refreshment stop to gather our wits and survey our purchases. We haven’t had a family wedding for quite some time and I’m so excited. No sneak preview snaps, I’m afraid. You’ll have to wait until after the big day! 😉

I was kindly given some theatre tokens for my birthday last year and had been umming and ahhing about which show Mum and I could go and see, when I realised I couldn’t use the tokens to book online, only in person or over the phone. This ruled out many a bargain! I mean, let’s face it, going to the theatre ain’t cheap (even after offsetting tokens!) Anyway, somebody mentioned to me the Churchill Theatre  in Bromley was very nice. I hadn’t thought closer to home and had only really been looking at West End venues. I had a beak online and the Churchill Theatre  had several shows listed that I suspected Mum and I would both like. They also accept tokens so I booked two tickets for us to see Son of  a Preacher Man at half the price we’d have paid to see a show in London. Don’t get me wrong, I love the West End as much as the next person but for the grand total of £12.00 (after redeeming tokens) we weren’t complaining.

I think I’ve mentioned before that I’ve an avid interest in Mindfulness and this month I’ve been taking part in a Free 21-day meditation experience via Oprah Winfrey/Deepak Chopra. Each meditation roughly lasts around twenty minutes, with a little talk from both Oprah and Deepak beforehand, and written reflections afterwards. I can’t tell you how relaxing and beneficial they’ve been. I know it’s not everyone’s cup of tea but for anyone who might be interested, here’s the link should you want to have a little look  Oprah/Deepak  All you do is register and then they inform you via email of any future options to join in. I could listen to Deepak’s voice all day long, it’s that soothing!

On the book front, I’ve been blessed with three new reviews for As Weekends Go  this month, all of which left me with the biggest smile on my face. What was so lovely as well was that all three ladies concerned expressed a desire to read  a sequel which is what I’m currently working on and makes all those days when I’ve cautiously asked myself if I’ve taken the right course of action in drafting a sequel as my second book, so worthwhile. I’m on the right track and can’t wait to share Rebecca and Alex’s fresh dramas with you. Here are the reviews should you fancy a read.

Two events this month made me gasp at where the years have gone. Firstly my eldest nephew’s 29th birthday (I swear he was eight years old five minutes ago!) and then when I met one of my lovely nieces for lunch last Friday. She’s nineteen and as I was sitting across the table from her listening to her stories from university, I couldn’t fathom how fast all five of my nieces and nephews have grown up. It’s crazy!

Here are some old photos of me with all of them, the memories so vivid in my mind they could have been taken yesterday. 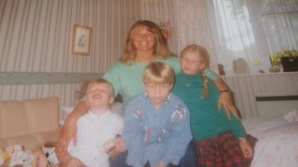 This month’s blooms may not be homegrown but I couldn’t resist showing them to you; some gorgeous gladioli I bought from the supermarket and a glorious lilies and sunflowers bouquet a good friend of mine sent me. 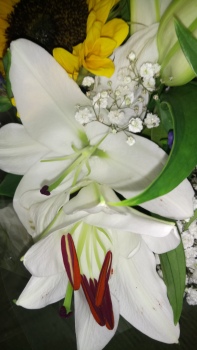 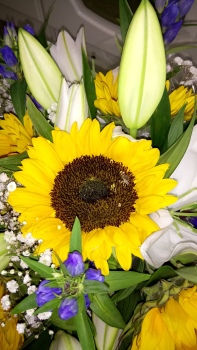 This trio of reads kept me entertained throughout July.

The Girlfriend by Michelle Frances – much hyped domestic noir type novel that explores the relationship tension between a mother and her only son’s new girlfriend.  Full of mounting tension, jealousy, secrets and lies, I couldn’t decide who I disliked more, the mother or the girlfriend  and really enjoyed it, my only criticism being the OTT Croydon-bashing. (The book’s not set in Croydon but it gets several mentions!) Being a Croydon girl, I accept the town is grim in part, as are countless other towns, but just felt the author overdid it slightly. Not enough to mar my enjoyment though and I’d certainly recommend this book. Kept me turning those pages for sure.

My second read was Lies  by TM Logan –  a fast-paced thriller about an ordinary man whose whole life is turned upside down due to one decision – a sort of Sliding Doors premise –  only poor Joe (main character) lurches from one sticky situation to another, whereby he’s trying to convince people around him that what is happening to him isn’t real but harsh evidence is very much suggesting otherwise.  (I can’t say too much as it’ll spoil it, you’ll see what I mean though if you read the book!). Twisty and suspenseful throughout.

My third read I’ve just finished is called Summer in San Remo  It’s by Evonne Wareham and it’s a gem of a read. In stark contrast to the above novels it’s light-hearted in tone, a feel-good book but one that also deals with some quite emotional issues. I loved Cassie, the main character. She co-runs a concierge service with her friend and receives the strangest, most mysterious commission from a client that sends her off to the Italian Riviera with a gorgeous side-kick you’ll love. Whilst there she encounters a harsh reminder of her past. The glam setting and descriptions put me right in the heart of the story and with some laugh out loud moments plus some really likeable characters (and one or two not so nice ones) it gets a big thumbs up from me. 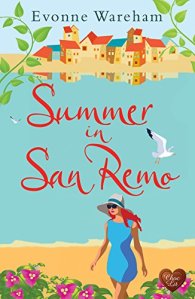